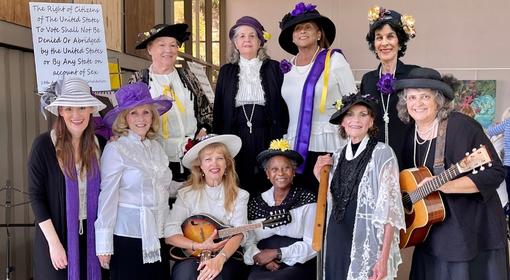 “THE SUFFRAGETTE MUSICAL: FROM BATTLES TO BALLOTS”
A CENTURY OF STRUGGLE FOR THE RIGHT TO VOTE

This performance is a co-production between Grand Vision Foundation and the Pennyroyal Players.

The Pennyroyal Players pay musical tribute to the 27 “Radical Women” of color and other famous American heroines who dared to fight for their rights – for freedom and to vote. The story begins in 1591 in England and ends in Tennessee in 1920 with the final ratification of the 19th Amendment to the US Constitution, providing all women the right to vote. In this fast-paced musical portrayal of the battles which were fought for freedom and equality, you will learn of the struggles, tragedies, and victories these heroic women faced every step of the way. Told with humor, historically accurate songs and based on familiar melodies, this show will entertain and amuse you.

This production was created by Anne Destabelle. Suitable for all ages.

The show is 1 hour with no intermission.

Pennyroyal Players is a group of philanthropic professional and semi-professional musicians who have been performing together for over 17 years. They sing, dance, play guitar, autoharp, flute, banjo, mandolin, banjolele, harmonica, and percussion. They have won awards and honors for their music and service work. For over 2,000 performances, they have toured Southern California, singing in libraries, museums, school auditoriums, churches, restaurants and even living rooms.

A portion of the proceeds from this performance will be donated to charity. To date, Pennyroyal players have raised over $167,000 for their charities.