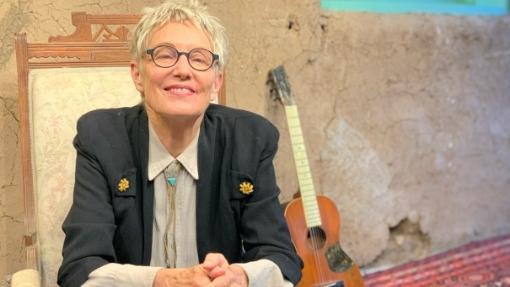 “A combination of gravity and grace… Her writing is poetry, something that most songwriters strive for but not so many actually achieve. The strength of her lyrics and music help set the work apart.” ~ Buddy Magazine

Eliza Gilkyson is a twice Grammy-nominated (2006/2015) singer-songwriter and activist who is one of the most respected musicians in Folk, Roots and Americana circles. Her songs have been covered by Joan Baez, Bob Geldof, The Conspirare Choir, Tom Rush and Rosanne Cash and have appeared in films, PBS specials and on prime-time TV.

“Drawing on elements of folk, country and Americana, Gilkyson, like contemporaries Shawn Colvin, Lucinda Williams, Rosanne Cash, demonstrates that the craft of songwriting, intelligent and lasting, is ultimately in the hands of those who can not only turn out a compelling second album, but five, or ten, or with this Grammy-nominated performer, over twenty.” ~ Direct Current Music

Enjoy a pre-concert wine tasting led by sommelier Mona Harrington. 7:00-7:45pm. $16 or free for members Friend level and above.

Rescheduled from April 9, 2022 to SEPTEMBER 17, 2022. All tickets purchased for the April concert will be honored on the new date, or if preferred, exchanged for a different concert or reimbursed.